I have been thinking about how the user can control things in their space/room, particularly for the Linnean experience. Key interactions will likely be direct, moving a slip around and so on. But what about putting up a mural or specifying a view of a series of slips?

In order to design some sort of a control mechanism I thought about what would needed to be controlled. So here is a room, with slips on a table, taxonomy on the wall, book case, slips or glossary on a ‘murder wall’ and even a window. The person in this drawing does not represent the user, but a guide. In such a room, the user should be able to specify what goes where, at least onto the ‘designated display areas’, such as the taxonomy ‘poster’ area and the notes/murder wall next to it, (so not necessarily move the bookshelf). 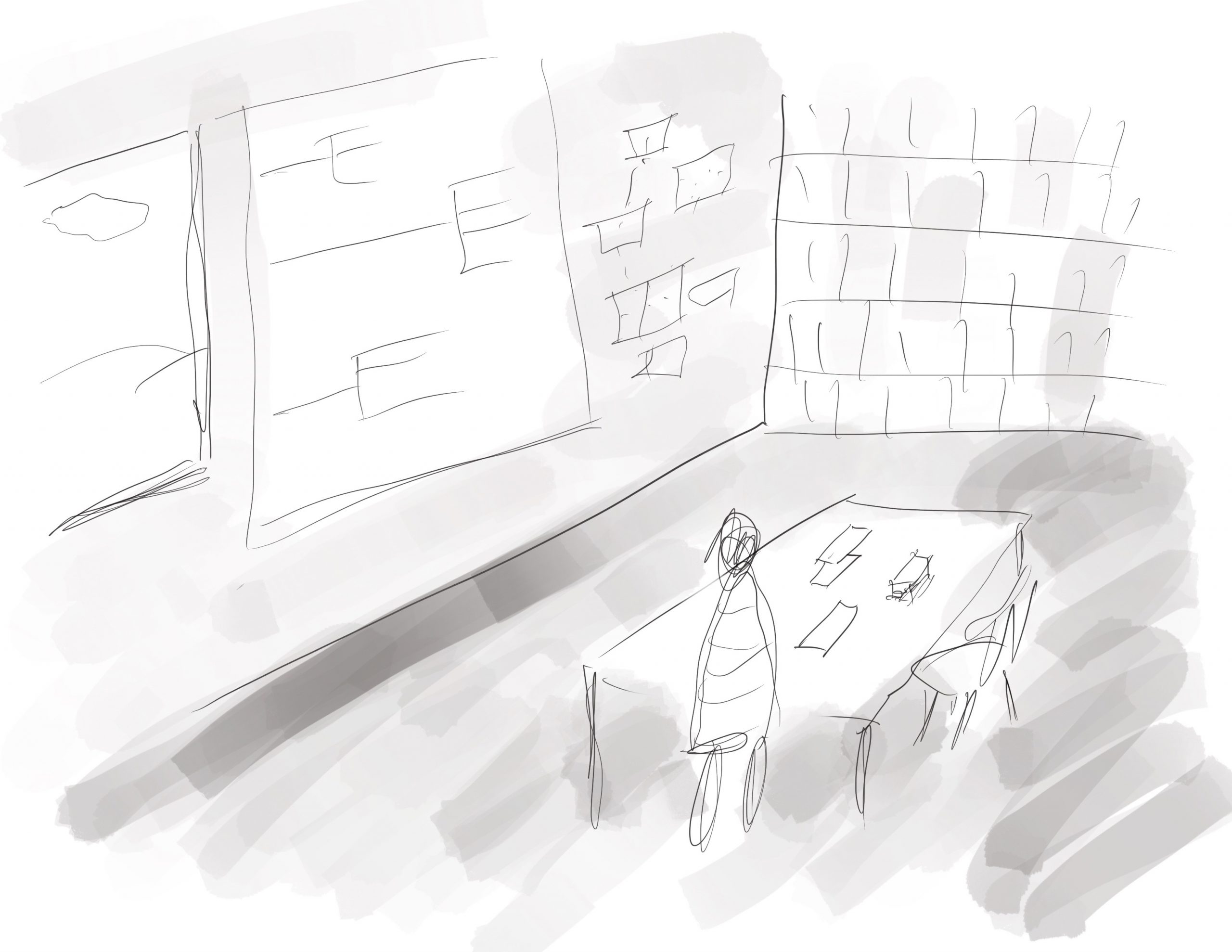 First of all, as many onboarding experiences seem to miss out on, how can the user get general controls? The idea of a ‘watch’ icon, on the wrist, as some VR applications have, appeals to me. It’s there only when you move your hand up and palm face you but it’s quite easy to remember and if you feel a bit lost you may very well look at your hands and boom, there it is. It could provide options for settings: 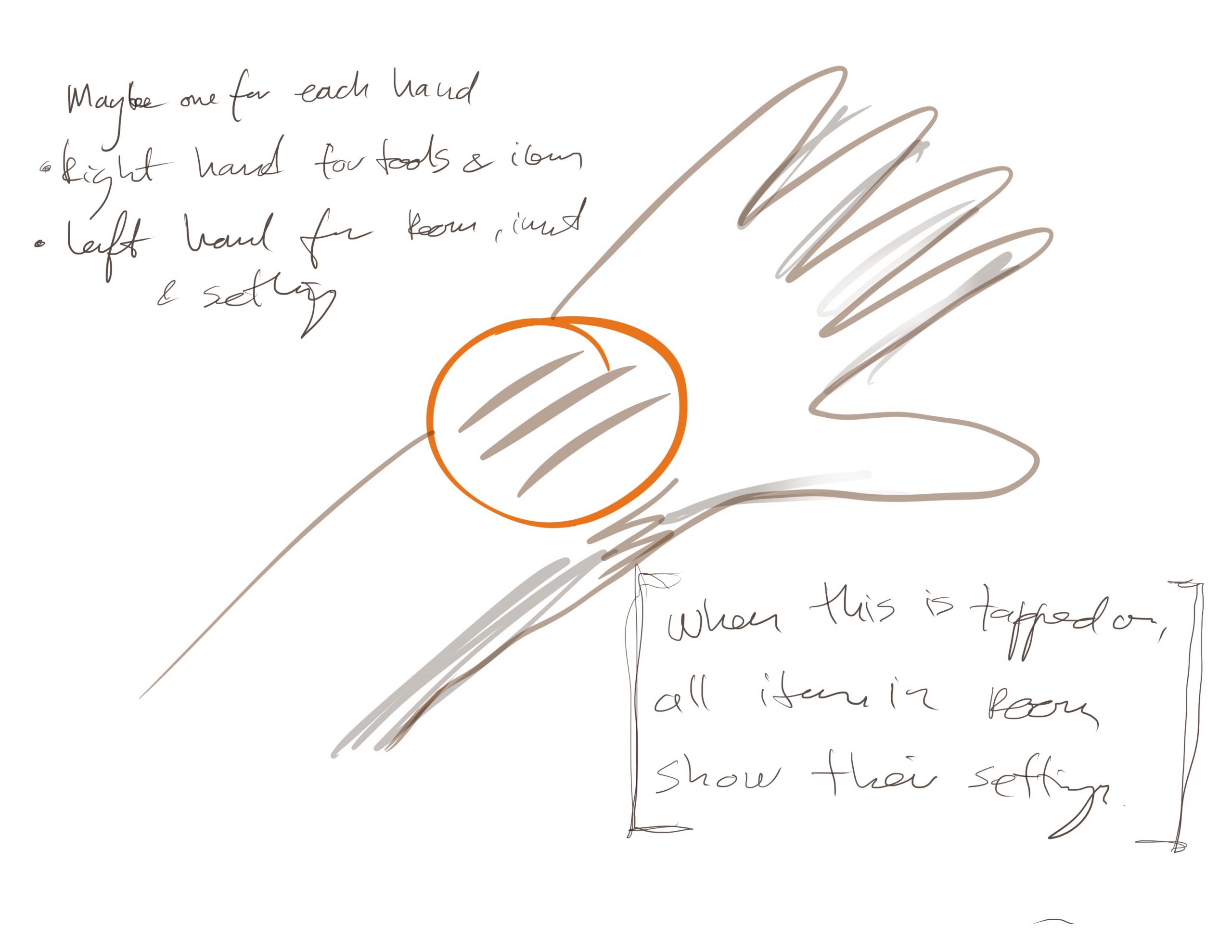 Maybe there could be one for each hand? Perhaps:
• left hand for import/export & room settings (import, export, choose room, set room time of day and so on, as well as persistent tool options, as might be in a Preferences section, not with the tool itself)
• right hand for tool settings (edit what is pointed to, rather than interact with what it is. For example change the taxonomy poster to a picture, but then when not in this mode the taxonomy can be interacted with, through pointing to names etc. This is similar to how in Immersed you can toggle your hands to be ‘active’ and then you can resize screens but this does not work when hands are inactive (and you use real-world, physical keyboard), which is great, because otherwise it’s very easy to bump a display and change it’s location or size)
The handedness this would need to be reversible of course, for those who are left handed. Emily joked ‘right click’, ‘left click’.

Another thought which struck me is that we will likely need to import objects, environments and data, which can hopefully be done in cool and natural ways, but it might be useful to have a straight ‘import’ button so to speak, as well as an ‘export’ option, for a document, scene, whatever, so I drew it up as an arrow, spawned by the wrist button. I think it should appear floating in front of the user and in this version there is a option to choose environments/backgrounds and tool options: 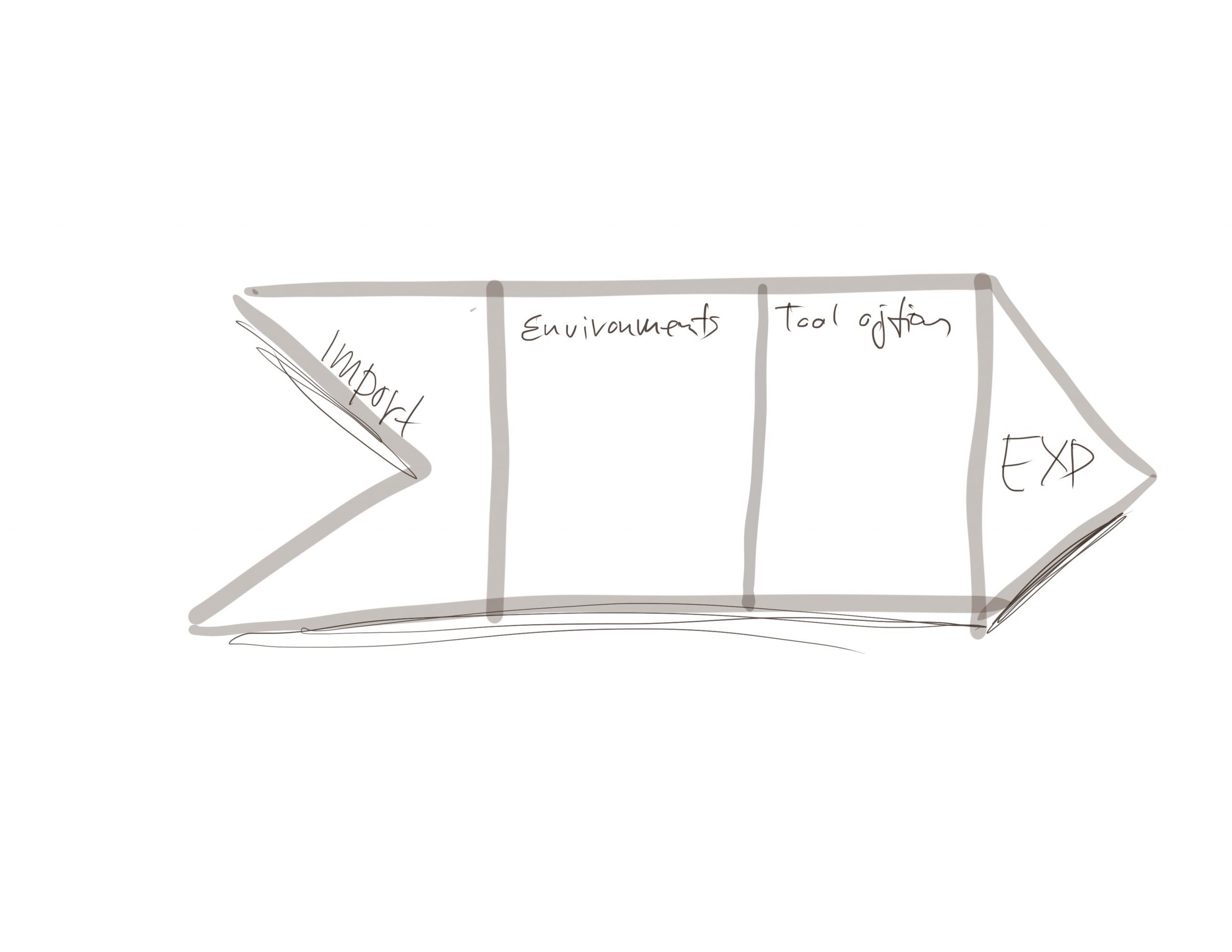 It would be great if there was tools the user could own, taking with them from room to room and in and out of VR, for note taking for example. This would have to be implemented and presented in a compelling and open way for other developers to support it in their own VR rooms.

Next is looking at interactions with items, such as moving a card in a mind map, versus moving the whole mind map to a different space or hiding it, through an edit mode.
I make the assertion that we can’t just have anything going anywhere in this Library/Room, as it would become difficult to control, much more than in a physical room since the effort to move things around in VR are so much less. A user can throw a poster on this wall or that, lots of cards all over the place, add 3D models and so on, with no physical effort. It is also useful to have some ‘muscle memory’ of where things are. If we go with this perspective then we’ll need controls for interaction with the display space, or frame, as well as what it displays.
Such ‘displays’ become almost like a computer display but with more options and with their content communicated to the room their are in.

Aspects of the Display

The Item: Depending on the item(s) being displayed.
The Frame: Move/change location, scale, change type (wall mounted, floating, table top). When edit mode is activated through the wrist band, options for such manipulations can be showed as glowing frames etc.

Elements of controls and settings

This site uses Akismet to reduce spam. Learn how your comment data is processed.